At A Glance: Our Top Picks For best 1-6 scope

A lot of AR-15 enthusiasts never consider the benefits of a 1-6 optic. You could benefit from a 1-6x scope in any of the following situations.

Equip Your AR-15 for Personal Defense

One thing we’re going to talk about in this roundup is how a 1-6 scope is a “medium-range” optic. When an AR-15 or similar high-powered rifle has a 1-6x scope, it becomes possible to obtain magnification on closer targets. If you want to use your AR-15 for personal defense, a high-powered optic is not ideal because it sacrifices the field of vision.

In A Shooting Competition

Many 3-Gun competitions require that participants use a rifle equipped with a 1-6 scope. A 3-Gun competition involves shooting moving targets with a pistol, a rifle, and a shotgun. It’s a competition that mimics shooting in dynamic circumstances. It’s a shooting range mixed with an obstacle course.

In some scenarios, shooters find themselves in a space where their iron sights aren’t providing the necessary magnification to sight and aim a target. A 1-6 scope is suitable for shooters ready to step up from their iron sights but aren’t prepared to invest in a high-powered scope or don’t need one.

When Would a 1-6 Scope Come in Handy?

If you’re asking yourself when a 1-6 would come in handy, as opposed to the high-powered scope you already have, here are three possible scenarios:

Many AR-15 enthusiasts who choose a 1-6 scope do so because they are in a field space or a competition where a high-powered scope is not the ideal optic for one reason or another. When you zoom in on a high-powered scope, you get a considerable amount of variable magnification, but you lose clarity everywhere else.

The problem with a high-powered scope is that what you gain in variable magnification, you lose in field of vision (FOV), meaning the more you zoom in on a target, the narrower your field of vision becomes. A 1-6 scope is an excellent alternative optic for any situation where you need some magnification, but not necessarily so much of it that you sacrifice FOV.

While it’s not exactly a perfect metaphor, it’s best to think of a 1-6 scope as a medium-range optic. It gives you a certain degree of variable magnification, but not so much that you sacrifice field of vision. If you find yourself in a situation where you still need some magnification even though your target is slightly closer, a 1-6 scope is a better option than a high-powered optic.

What to Look For When Buying a 1-6 Scope

If you’re considering upgrading your AR-15 or another high-powered rifle with a 1-6 scope, there are three things you should take into consideration before you make your purchase.

One of the most significant advantages a 1-6 scope or similar LVPO has over iron sights is a wide variety of reticle configurations. With a 1-6 scope on your AR-15, you’ll have the comfort of using a reticle that works for you. With a 1-6 scope, you can get more elaborate reticle designs, high-tech BDC reticles, or even just old-fashioned crosshairs.

You’ll want a hard, thick lens with multi-coat protection that won’t fog up in the rain or the cold. If you’re going to have a realistic chance of hitting your target, whether it’s closer in or further downrange, you need to be able to hit what you’re aiming at. Whatever 1-6 scope you end up choosing, make sure it has high-quality lenses.

Review of the Best 1-6 Scope

Here is our roundup of the best 1-6 scopes on the market today. We’ve included links to each of these scopes if you want a little more detail. Of course, we’ve also thrown in our two cents.

We struggled to find anyone who had anything bad to say about the Mirage. Users report this scope is reasonably priced and easy to install.

We agreed with many of the user reviews we came across. The Mirage stands out to us because you get a ton of features at a reasonable price point. We liked the T6-grade aluminum construction and the low-profile capped turrets. We also wanted multi-coated lenses and water resistance at up to ten meters.

If you want the perfect middle ground between features and price, the Mirage wins hands down. The Mirage is affordable, reliable, and powerful.

While the majority of testimonials about the Viper were positive, we did find accounts of problems. Some users complained the eyebox was uncomfortable, while others felt the selector knob was tricky when changing brightness.

The Vortex Viper PST stands out to us because of the high-quality construction and the meticulous attention to detail that has gone into every feature of this 1-6 scope. We liked the high-quality glass and the wide variety of illumination settings. We loved the capped turrets and the situational awareness afforded by the second focal plane.

While we encountered some of the same problems as other people who bought the Viper, we felt the Viper PST was the best choice for Vortex platforms. This is a deluxe, well-designed scope.

Most of the buyer testimonials for the Acupoint were positive, with most users saying the optic was well-built and usually did the job. However, we came across numerous reports of poor illumination and a clunky reticle.

While some users have reported issues with this scope, this is a quality product that will last a long time and get the job done. 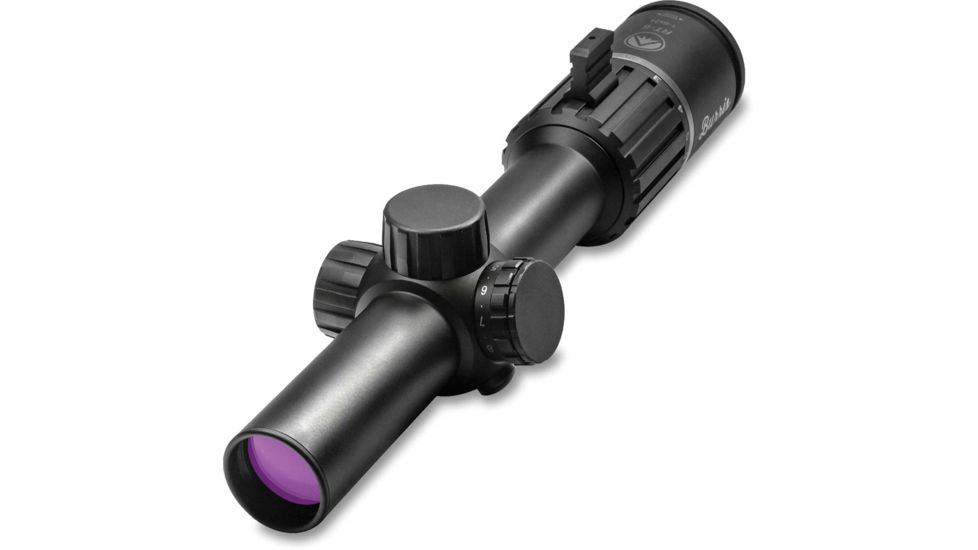 While we found many shooters out there who liked this optic because of its features and its easy-on-the-wallet price point, we found several people who reported problems with the R-T6. Some users complained they couldn’t hear the turrets, while others bought the R-T6 after thinking (incorrectly) that the scope had an illuminated reticle.

We also found testimonials saying the cap to the battery compartment was nearly impossible to remove, as well as numerous stories of poor customer support.

The Burris R-T6 won the budget spot on our list because of its durable construction and high-quality lenses. This is a truly impressive scope with a great list of design features for its budget-level price point. We especially liked the comfortable eye relief and the high-quality fog-resistant lenses.

If you’re on a tight budget and you’re in the market for a decent 1-6 scope, the R-T6 is your best bet. 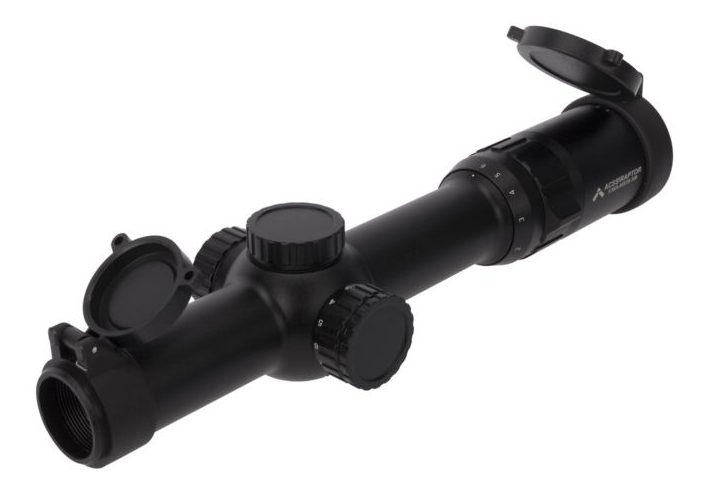 While we read testimonials from a few users who didn’t like the reticle design and a few who didn’t think the illumination on this scope is bright enough, most users were happy with this scope being reasonably priced and easy to install.

The SLx stands out to us because of its thick, well-designed lenses, the first focal plane reticle, and the illuminated red dot. We also liked the Picatinny rail system (our preference, and the waterproof construction. The SLx is the best optic for Primary Arms enthusiasts.

If you’re a Primary Arms user, the SLx strikes a good balance between price and features.

What Are the Benefits of a 1-6x Scope?

For AR – 15 enthusiasts, having a 1-6x scope in your kit somewhere has several benefits…

A 1-6x scope puts you in that “Goldilocks zone,” where you can sight targets at multiple ranges more seamlessly.

Many AR-15 enthusiasts end up in scenarios in the field or on the range where they need some variable magnification a little further out. Still, they don’t want the gradual ebbing of FOV that comes with using a high-powered optic. For those scenarios where you’re concerned with striking just the right balance between magnification and distance, a 1- 6 scope is your best bet.

Suppose you’re in a situation where you need a more seamless way to toggle between ranges, or you need more pinpoint accuracy on closer targets without sacrificing FOV. In that case, a 1-6 scope is a worthwhile investment. When choosing a 1-6 scope, pick one that has durable construction and high-quality lenses.

Here’s the little FAQ we put at the end of every roundup. These are the most common questions about 1-6 scopes we get from our readers.

How Far Can You Shoot With a 1-6x Scope?

What Magnification Do You Need to Shoot 1000 Yards?

Joseph Fox writes on a variety of topics ranging from reloading ammunition to gun cleaning. He has been featured on various publications like thetruthaboutguns, Sofrep & many more. Joseph is also the founder of Gunloading, where he reviews different types of reloading & firearm products available on the market.

Gunloading.com is a participant in the Amazon Associates Program, an affiliate advertising program designed to provide a means for us to earn fees by linking to Amazon.com and affiliated sites.